In light of the South African World Cup 2010 that is going on, I did some research on previous World Cups and their histories… and found some interesting pieces of history! 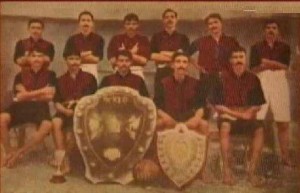 In 1950, India had qualified for the World Cup by default due to withdrawal of all of their scheduled opponents. However the governing body, AIFF, decided against going to the World Cup in 1950. And there are two different stories on why this decision was made:

According to Shailen Manna, the Captain of the Indian squad at the time, this was just an excuse to cover up the disastrous decision made by the AIFF. However it is true that in the 1952 Summer Olympics, the players on the Indian squad were still barefoot when they got destroyed 1-10 by Yugoslavia. So I’m not sure what to believe – but it’s true, India was among the 3 nations that withdrew from the 1950 World Cup, leaving only 13 countries to play. Scotland and Turkey were the other two teams to withdraw from the tournament that year.

In the 1966 World Cup, which is famous for being the only World Cup that England ever won the tournament (despite their statute of being nation of football and the most popular football league in the world, the Premiere League), other interesting things happened. In Group 4, the two countries to advance over Italy and Chile were Korea DPR (better known as North Korea) and the USSR (former Russia). In the group stage matches, North Korea beat Italy by a score of 1-0, while the USSR beat all 3 teams for an impressive 9 points out of the group stage. So I guess the 2002 defeat of the Italian team at the hands Korea Republic (South Korea) was NOT the first time that Korea had beaten Italy in the World Cup finals.

Hitler Messes It Up… again

In the 1938 World Cup, Austria and Germany had both qualified for the tournament. However, when Hitler decided to forge Austria to form his great German Empire, Austria’s team was dissolved into the German team as one national team, leaving the tournament with only 15 teams, rather than 16 teams. Fuck Hitler and his mustache!

The 2010 World Cup, which is the first World Cup to be held in the continent of Africa, has been one full of upsets.

Currently we enjoy a spectacular World Cup tournament with 32 countries competing in the tournament from all over the world. However this was not the case until very recent years. It was only in the 1982 World Cup that the # of spots available in the World Cup finals was increased to 24 from 16. And it was not until 1998 until it was expanded to 32 spots. We finally have a true “World” Cup finals, with more nations competing for glory, and really bringing the whole world together in the most spectacular sporting event in the world.

The Original World Cup Was Melted 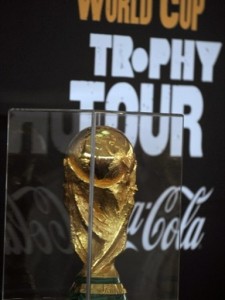 When Brazil won their 3rd World Cup in 1970, they were entitled to keep the trophy permanently, as was the rule. However it was stolen in 1983 by thieves. I have no idea what kind of security the Brazilians had over such a prized possession. But the bottom line is that it was never recovered and it is suspected to have been melted by the thieves for cash. After 1970 they designed a new trophy made of 18 carat gold and weighing just over 6 kilograms.